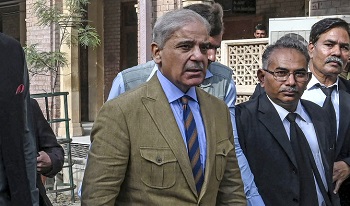 ISLAMABAD: The National Accountability Bureau (NAB) has summoned Opposition Leader in National Assembly Shehbaz Sharif today (Friday) in a money laundering case. The anti-graft watchdog has sought details of foreign assets and other businesses from the Pakistan Muslim League-Nawaz (PML-N) president. “A complete detail of your foreign assets along with year of acquisition/disposal and source of personal/bank loans along with details of loan repayment and current outstanding loan should be provided,” reads questionnaire sent to Shehbaz Sharif. The summon orders for the PML-N chief from NAB authorities were delivered at the Jati Umrah and Model Town residences of the party leader on March 30.

It is pertinent to mention here that other than Shehbaz, his sons Hamza Shehbaz and Suleman Shehbaz are also nominated in the money laundering case. Hamza Shehbaz is already imprisoned in the case while properties of former chief minister were confiscated on the court order. Last month, the National Accountability Bureau (NAB) had closed its inquiry regarding allotment of 12 plots against Pakistan Muslim League-Nawaz President Shehbaz Sharif.