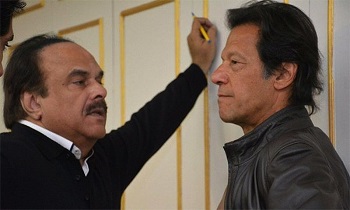 KARACHI: PTI Naeemul Haque has died after battling cancer, federal minister Fawad Chaudhry announced in a tweet on Saturday. He was 70. His family confirmed his death.

The senior leader of the ruling PTI was under treatment at a hospital in Karachi.

Haque was the former central information secretary and one of the founding members of the PTI. He was also the former president of PTI's Sindh chapter.

When the PTI came into power in 2018, he was appointed the Prime Minister's Special Assistant on Political Affairs.

Haque's funeral prayers will be offered after Asr prayers on Sunday at Masjid Aisha, Khayaban-e-Ittehad in Karachi's DHA, according to a statement issued by PTI Karachi.

A tweet by the PTI's official Twitter account called Haque "a dedicated Pakistani, a loyal friend and a kind human being". It said the entire PTI family is aggrieved upon his demise.

Prime Minister Imran Khan had called on the deceased leader at his residence earlier this month while he was undergoing treatment.

Prime Minister Imran in a tweet said he was "devastated by one of my oldest friend Naeem's passing".

"He was one of the 10 founding members of PTI & by far the most loyal. In 23 yrs of PTI's trials & tribulations, he stood by me. He was always there for support whenever we were at our lowest ebb.

"In the last two years I saw him battle cancer with courage and optimism. Till the very end he was involved in Party affairs and attended cabinet meetings as long as he was able. His passing has left an irreplaceable void."

Haque "fought like a lion" against cancer, tweeted Federal Minister for Science and Technology Chaudhry, terming the deceased politician "a friend, elder and a colleague".

Human Rights Minister Shireen Mazari tweeted that in Haque's passing, she has lost "a unique friend".

"His humour, his political support for me in PTI, his passion for music, his temper — & his fight against cancer till the end — all was so "Naeem"! Can't imagine PTI without Naeem frankly! So many wonderful memories come flooding," she said.

Foreign Minister Shah Mehmood Qureshi said Haque "fought cancer with true grit and determination. His commitment to the party and services to PTI were invaluable. He was a great friend and shall be missed."

Senior journalist Mazhar Abbas said Haque was "like a brother" to him as they knew each other since the 1980s. "A big loss for his family, friends and PM Imran Khan. May Allah give his family strength to bear the loss," he wrote.

Opposition leader and PML-N president Shehbaz Sharif also tweeted his condolences saying: "Very sad to hear about the passing away of Naeemul Haque. My profound condolences to the bereaved family and the PTI."