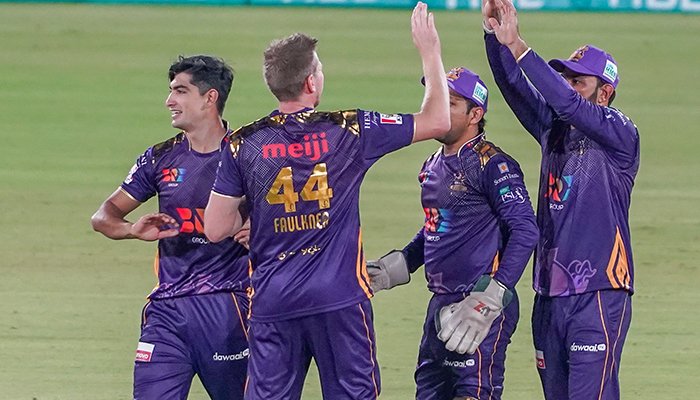 KARACHI: Pakistan fast-bowler Nasim Shah clinched a five-wicket haul as Quetta Gladiators got off the mark at the HBL Pakistan Super League after beating Karachi Kings by eight wickets here at the National Stadium on Saturday.

Nasim ended up with figures of 5-20 as Quetta, after winning the toss, restricted Karachi to a paltry total of 114, which the Sarfraz Ahmed-led side chased down comfortably. Quetta openers Ahsan Ali and Will Smeed (30 off 35, three fours and a six), combined for a 76-run partnership, which ended with the latter falling to Mohammad Imran in the 12th over.

Ahsan scored an unbeaten 57 off 43 with the help of eight boundaries. The right-hander was joined by Quetta captain Sarfraz Ahmad after Ben Duckett was run out after a mix up with Ahsan.

Earlier, Babar Azam’s Karachi Kings could not bounce back after losing flamboyant opener Sharjeel Khan with only 16 runs on the board.

The left-hander miscued a pull shot off veteran medium pacer Sohail Tanvir’s delivery, after adding only 10 runs to the total.

With Babar — who opened the innings with Sharjeel — and the incoming Tom Lammonby on the crease, Karachi were reeling at 26-2, when Nasim was introduced in the attack. The pacer struck on his first two balls, removing Lammonby and Mohammad Nabi.

Nasim returned in the seventh over to get his fourth when he cleaned up Lewis Gregory and completed his five-wicket haul dismissing Imad Wasim, who looked dangerous, for 26 off 22 balls.

Imad was the Kings’ second-highest run-scorer after skipper Babar, who managed only 32 off 29. All-rounder Aamer Yamin contributed 20 off 10.