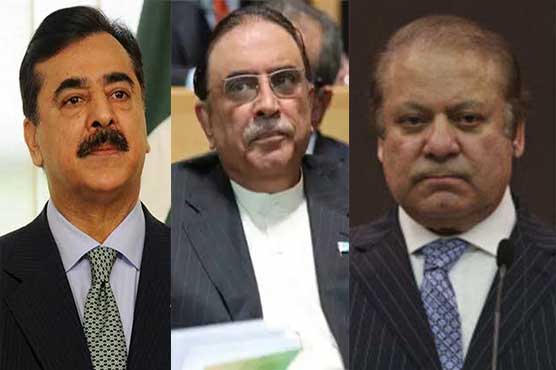 Judge Syed Asghar Ali of the newly established accountability court will resume proceedings in the matter on May 29.

Khawaja Anwar Majeed and Khawaja Abdul Ghani Majeed, owners of the Omni Group, were also nominated as accused in the reference.

The reference states that Mr Zardari and Mr Sharif obt­ained cars from Tosha­khana by paying 15 per cent of the price of the cars. The bureau further alleged that Mr Gillani facilitated Mr Zardari and Mr Nawaz in this regard. He dishonestly and illegally relaxed the procedure for the acceptance and disposal of gifts, issued by the government of Pakistan vide Cabinet Division’s Memorandum No.9/8/2004-TK dated June 25, 2007, which expressly stipulates that vehicles shall not be allowed to be purchased by the recipients and be given to the central pool of care of the Cabinet Division.

Reference further states that Mr Zardari accepted and received the armoured vehicles as gift from the United Arab Emirates (BMW750 Li model 2005, Lexus Jeep model 2007) and from Libya (BMW 760 Li model 2008) in September-October 2008. It was obligated to immediately report and deposit the vehicles with Toshakhana of Cabinet Division but he neither reported the gifted vehicles nor despoiled the same.

The NAB reference alleges that Mr Sharif did not hold any public office in year 2008. However, from April to December 2008 without giving any application or request to then prime minister Gillani dishonestly and illegally obtained relaxation for his benefits of procedure for the vide Cabinet Division’s above said Memorandum which expressly stipulate that vehicles shall not be allowed to be purchased by the recipients and be given to the Central Pool of cars of the Cabinet Division. “Nawaz Sharif knowingly and with dishonest intention obtained illegal favour in connivance with the then prime minister Yousaf Raza Gillani by obtaining the relaxation of said procedure for the acceptance and disposal of gifts,” reference states.

In the Toshakhana reference, Khawaja Anwar Majeed having control of and by operating accounts of M/s Ansari Sugar Mills Ltd transferred Rs9.2 million from bank account No 3172-2 maintained with National Bank of Pakistan’s Avari Tower Branch, Karachi, vide cheque dated 23-04-2009 to the account No 0023-011009761001 of Mr Zardari.

He made another payment Rs11,117,557 from account No 4108080922 on the behalf of Mr Zardari. Accused persons as part of their overall illicit scheme made payment totalling to Rs20,317,557 for undue benefit of Mr Zardari.

The NAB investigation has accused these public figures of having committed the offence of corruption and being involved in corrupt practices defined under various sections of NAB. NAB has requested the court to conduct a trial and sentence the accused to the strictest possible jail terms under the NAB Ordinance for their involvement in the corruption scam.