New coronavirus is of natural origin: WHO 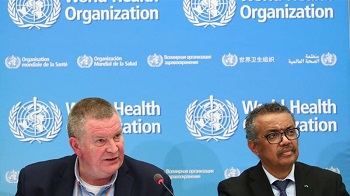 The World Health Organization reiterated that the new coronavirus was of natural origin after US President Donald Trump claimed he had seen evidence it originated in a Chinese lab.

Trump claimed Thursday that he had seen proof that the Wuhan Institute of Virology was actually the source of the outbreak, although he refused to give details.

Asked about Trump’s claim during a virtual press conference, WHO emergencies chief Michael Ryan stressed that the UN health agency had “listened again and again to numerous scientists who have looked at the sequences” of the virus.

“We are assured that this virus is natural in origin,” he said, reiterating a stance the UN agency has expressed previously.

The WHO said earlier Friday that it wanted to be invited to take part in Chinese investigations into the animal origins of the pandemic, which in a matter of months has killed more than 230,000 people worldwide. What is important is that we establish what that natural host for this virus is,” Ryan said, stressing the need to understand “how the animal-human species barrier was breached.” “And the purpose of understanding that is that we can put in place the necessary prevention and public health measures to prevent that happening again anywhere,” he said.

WHO chief Tedros Adhanom Ghebreyesus meanwhile continued Friday to push back against criticism lobbed at his organisation, by Trump in particular, who suspended Washington’s funding after accusing the UN agency of downplaying the seriousness of the outbreak and kowtowing to China.

Tedros said the WHO had sounded the highest level of alert by declaring that the COVID-19 outbreak constituted a “public health emergency of international concern” on January 30, when there were no deaths and only 82 cases registered outside China.

“We didn’t waste any time,” he told Friday’s briefing. “The world had enough time to intervene.”

His comments came after WHO’s emergency committee met for the first time since making its declaration three months ago. “Of course, the pandemic remains a public health emergency of international concern,” Tedros said after receiving the recommendations from the committee, made up of 19 independent experts. While maintaining the global alert level, the experts made a range of general recommendations on how the WHO and countries should adjust their response to the pandemic. It called among other things for broad cooperation to “identify the zoonotic source of the virus and the route of introduction to the human population.”