No closure of groceries,general stores or pharmacies: Syed Murad Ali 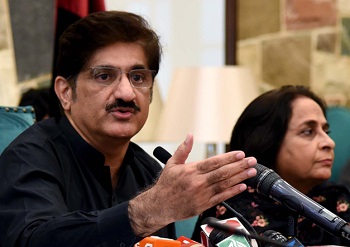 KARACHI: Sindh’s chief minister on Monday said his government will not order the closure of groceries, general stores or pharmacies in the province in any circumstances.

Syed Murad Ali also advised the concerned citizens against panic buying because of the fear that shops may be shut as cases of COVID-19 keep rising in the province.

The chief executive was addressing a news conference at the CM House regarding the latest situation of the coronavirus-related health emergency in the province. He was accompanied by his law adviser Barrister Murtaza Wahab and Health Minister Azra Fazal Pechuho.

“I can assure you that given the current circumstances and also considering the foreseeable future in the province, barring any extreme eventuality, I’m not going to order the closure of groceries, general stores or pharmacies,” said Shah.

He said that ordering such an extreme measure (the closure of shops) was out of the question for his government because such a harsh step was not even taken in China, the epicentre of the coronavirus pandemic.

He also said he would order the police officials to start cracking down on the retailers who had jacked up the prices of essential items or were hoarding the products required by the citizens to deal with such an emergency health situation.

The police will be asked to raid the stores and shopping centres where the retailers had been selling products like hand sanitisers, soaps, tissue papers and toilet rolls at exorbitant rates, he added.

The CM said he believed that restaurants should be closed in the city given that such places attracted large crowds, but at the moment he was not ordering their closure.

He said that while participating in a meeting via video link earlier in the day, he had proposed a number of measures to the prime minister to be taken in the country to prevent the transmission of the viral outbreak among the masses.

He also said that at the moment he would not disclose to the media the measures he had proposed to the PM, adding that he would like the premier himself to announce those measures.

He asked the citizens to remain indoors as much as possible and avoid unnecessary movement outside their homes for at least the next 14 days to prevent further spread of the virus.

“Ideally speaking, if people in the entire Pakistan keep themselves confined to their homes for the next 14 days, after the passage of this period we will be completely secured,” said Shah. “After that we will come to know about the exact number of people who are infected and whose treatment is required. But obviously such an ideal situation cannot be achieved.”

He said that people would remain safer if they keep themselves indoors by avoiding unnecessary movement outside their homes. People will not contract coronavirus if they observe safe social distancing from each other and avoid physical contact with infected people, he added.

The CM said he was fully aware of the situation of people thronging the Sea View beach the very next day of the closure of schools, stressing that such a situation should not have taken place.

He said people should avoid visiting such places unnecessarily, warning them that he would be left with no other option but to order the complete closure of all such places. People should wash their hands as much as possible and use hand sanitisers to avoid catching the virus, he added.

Later in the evening, the CM released a statement saying his government is considering the order of daily closure of restaurants and tea shops in the province by 9pm as a precautionary measure to prevent the transmission of coronavirus among the locals. “I will go for complete closure of the hotels and restaurants if people keep on dining out late at night.”

Shah told the news conference earlier that it was very much likely that the number of people testing positive for COVID-19 would rapidly increase in the province in the days to come due to tests being carried out on the pilgrims being brought from Taftan to Sukkur.

He, however, said that it would not be a frightening scenario if the number of coronavirus cases were to increase in the province as long as the infected people from abroad were kept in complete isolation.

He also said that these flats had 2,048 rooms, which were being used to keep the pilgrims in complete isolation, adding that all the due arrangements were being made for fulfilling food and other necessary requirements of the people in quarantine.

“As far as these people returning from Taftan are being kept in isolation for the next 14 days, they and other people in the surrounding areas will remain secured, as the risk will only emerge if these people coming from Iran are allowed to meet with the other residents of the province, and we have to avoid such a scenario at all costs.”

He said that so far 200 pilgrims who had been brought from Sukkur were tested for coronavirus. He added that although observing quarantine arrangements against the spread of such a viral outbreak was the prerogative of the federal government, his government had been making all such arrangements for keeping the pilgrims returning to Sindh from Taftan completely isolated to prevent further transmission of the virus.

The CM said that as a preventive measure, outside visitors were not being allowed inside the prisons to prevent the outbreak of the viral disease among the inmates.

He said in the statement later that the family members of the pilgrims who had returned from Taftan and were being kept in Sukkur in isolation would be provided with ration at their doorstep.

“I’m well aware of the situation that you who are breadwinners have been kept in isolation. I know that you are worried about earning for your families. You should keep this worry aside and concentrate on your health and recovery. Your government will keep making food arrangements for your households.”