No plan to import vegetables from India: FO 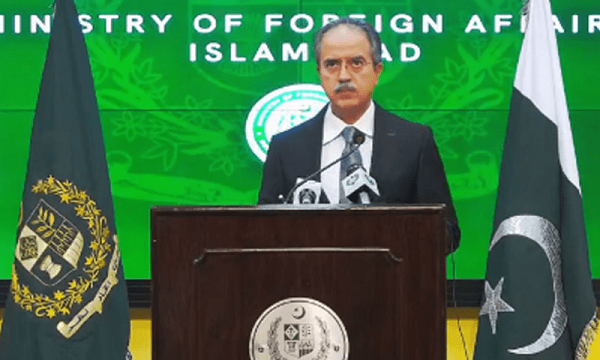 ISLAMABAD: Foreign Office (FO) said on Thursday that currently, there is no plan to import vegetables and other items from India as there is no such thing under consideration.

Meanwhile, the Indian Charge d’Affaires in Islamabad was called to the Ministry of Foreign Affairs and a strong demarche was made over India’s continued apathy towards the iconic Hurriyat leader’s right to a burial in accordance with his will and the wishes of his family.

“Pakistan’s deep regret was conveyed over government of India’s persisting intransigence that has denied Syed Ali Geelani’s mortal remains a dignified burial in the “Cemetery of Martyrs” as per his desire”, said the Foreign Office.

More ominously, Kashmiris, it added, are not even allowed to pay respects to the revered leader at the graveyard in Hyderpora, Srinagar where he was hurriedly buried last year, by the Indian occupation forces in the absence of his family and followers.

“We believe no amount of Indian brutality, apathy and incredible absence of morality can dampen either the spirit of resistance of the Kashmiris in IIOJK or the fond remembrance of its people for their visionary leaders of the like of Syed Ali Geelani”, FO spokesman said.

On the first martyrdom anniversary of the iconic Kashmiri Hurriyat leader Syed Ali Geelani, the Foreign Office paying tributes to him, said he was personification of sheer courage and grit and the face of Kashmiri people’s valiant struggle to achieve right to self-determination as enshrined in numerous UNSC resolutions.

Foreign Minister Bilawal Bhutto Zardari also commented, “On 1st martyrdom anniversary of Syed Ali Shah Geelani, I join Kashmiri people in paying rich tribute to the bravest and most ardent advocate of Kashmir’s freedom struggle. Geelani Sahib’s memory will continue to inspire Kashmiris in their quest for a future free from Indian occupation.”

The armed forces also paid tribute to the Kashmiri leader with DG ISPR in a Tweet saying, “Pakistan nation pays tribute to brave Syed Ali Shah Geelani for epic resistance and fight against worst Indian oppression/atrocities in IIOJK. His lifelong struggle for right to self-determination as per aspirations of people of Kashmir & UN resolutions shall always inspire generations to come.”

Pakistan also strongly condemned the extrajudicial killing of five more innocent Kashmiris by Indian occupation forces in two separate incidents in the last two days. “These incidents include three killings during an orchestrated ‘cordon-and-search’ operation in the Nagbal area of Shopian district, while last night a separate fake encounter led to the extrajudicial killing of two more Kashmiris in Sopore area of IIOJK,” said the spokesman.

Commenting on the continuing catastrophe as the nation reels from the continuing flooding with forecasts of more rain in some areas, the spokesman pointed to a statement from Foreign Minister Bilawal Bhutto Zardari in which he said that Pakistan has become the ground zero of the consequences of global warming. “The international community, particularly those historically responsible for climate change, must step up and share the burden of these losses in the spirit of solidarity,” said Bilawal.

Giving further details, the spokesman said that the country was in relief phase right now, followed by important transition to the reconstruction and rehabilitation phase, which, given the mega scale of this disaster, will require continued, sustained and substantial support of the international community.

“All our efforts will be focused on this. The sheer scale of the calamity has, however, stretched our resources and capacities to the limit, thus necessitating support from the international community. And we have already seen an outpouring of that support and solidarity, with a large number of our friends and partners stepping forward with assistance to buttress the government-led relief efforts”, he noted.

UN Secretary General is expected to be in Islamabad on September 9, early morning and he will have a busy schedule in Islamabad that day including calls-on and meetings with the leadership, including the PM and the Foreign Minister, besides other engagements.

“On the next day, we are preparing for his visits to the flood-affected areas. So, there are things to be finalised and as soon as these details are shaped in the form of a final programme, we will share more information with you. Important thing is that this is going to be a very significant visit especially after the launch of the flash appeal,” said the spokesman.

To a query on efforts by former PM Imran Khan to collect funds for flood relief, the spokesman remarked, “I would submit that when we say that this is a national disaster and the entire nation is mobilised to respond to this disaster, so, we expect that, you know, corresponding to that responsibility, all of us, myself, you, everyone in this room, and all Pakistanis, all political parties, they are together shouldering the responsibility towards the people who have been affected by this calamity. So, I think that should remain a key objective and focus.”