No safe havens of terrorists in Pakistan: Imran Khan 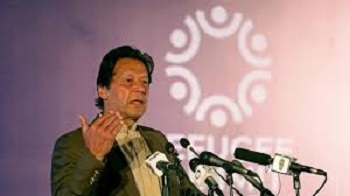 ISLAMABAD: Prime Minister Imran Khan Monday categorically said there were no safe havens of terrorists in Pakistan adding that such a scenario could have been possible soon after 9/11 as militants fled Afghanistan.

Addressing the Refugee Summit, marking the 40 years of hosting Afghan refugees in Pakistan, Imran pointed out that keeping a complete check on the refugee camps with over 500,000 people there could be difficult for any government.

He said Pakistan had started border fencing to keep a vigil on the situation, stressing that “it should be rest assured that instability in Afghanistan is not in Pakistan's interest.”

The prime minister categorically dismissed the statement of Afghan Second Vice President Sarwar Danesh, who on the occasion accused Pakistan of “'harboring terrorists in the refugee camps responsible for instability in Afghanistan''. Imran said despite economic challenges, Pakistan throughout provided educational and vocational training to Afghan refugees besides ensuring their social inclusion.

Imran said the entire leadership in Pakistan, including the civilian and military, was on the same page for its commitment to peace in Afghanistan.

He said ensuring connectivity between Pakistan, Afghanistan and Central Asia was future of the region’s development and prosperity that required commitment by all stakeholders.

He mentioned the presence of US Special Representative on Afghanistan Reconciliation Zalmay Khalilzad on the occasion, terming it a testament of goodwill for peace in Afghanistan.

He said the people of Afghanistan suffered the most in recent history and stressed that it was responsibility of the world to share the burden with Pakistan.

He said the ‘pleasant side’ of Afghan refugees in Pakistan was rearing of a professional cricket team of Afghanistan of its own, who recently defeated the under-19 Pakistani cricket team.

He drew the attention of audience towards the blatant human rights violations in the Indian Occupied Jammu and Kashmir where minorities particularly Muslims, were marginalised.

He said the racist ideology of incumbent Indian government had severe implications and urged upon the United Nations to take notice of the situation.

Speaking on the occasion, Afghan Minister for Refugees and Repatriation Syed Hussain Alami Balkhi expressed gratitude to Pakistan for hosting Afghan refugees for 40 years, saying joint efforts were still needed for their safe and voluntary return.

"We thank Pakistan for its generosity for such a long time and for hosting our people in need," Balkhi said.

The Afghan minister said the plan for return of refugees would be chalked out after consultations among Pakistan, Afghanistan, Iran and United Nations High Commission for Refugees (UNHCR).

The quadri-partite Solutions Strategy for Afghan Refugees (SSAR) provides a framework for cooperation between humanitarian and development actors to address the needs of Afghan refugees.

Balkhi said joint efforts were required to create an environment conducive to the gradual and planned return of refugees to Afghanistan with peace as the foremost need.

He said the meetings of four stakeholders were held from time to time in Afghanistan, Pakistan and Iran, with next one to be held in Iran.

Over 6.5 million Afghan refugees live abroad with nearly 2.7 million in Pakistan and a significant population in Iran.

Reaffirming Pakistan’s steadfast support for the Afghan peace and reconciliation, he also said sustainable peace and creation of a conducive environment and ‘pull factors’ would facilitate return of Afghan refugees to their homeland with dignity and honour.

He observed this as UN Secretary General called on him here.

Antonio Guterres is here to attend the International Conference on 40 years of hosting Afghan refugees in Pakistan.

Imran highlighted Pakistan’s generosity in hosting millions of Afghan refugees for the last four decades and noted that the people of Pakistan drew their inspiration to host refugees from the teachings of the Holy Prophet (SAW).

Imran underscored that the Kashmiri people continued to look to the United Nations to honour its commitments for realisation of their right to self-determination as enshrined in numerous UN Security Council resolutions.

The prime minister stressed that climate change posed an existential threat to mankind and assured the UN secretary general that Pakistan would work hand in hand with the global community to pursue a swift implementation of the Paris Climate Agreement. The prime minister also highlighted the landmark 10 Billion Tree Tsunami.

He underscored that there was no military solution to the Afghan conflict and reaffirmed Pakistan’s steadfast support for efforts for Afghan peace and reconciliation.