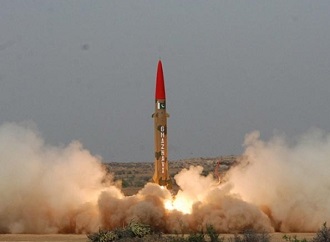 ISLAMABAD: Pakistan on Thursday conducted a successful training launch of surface-to-surface ballistic missile ‘Ghaznavi’, capable of delivering multiple types of warheads up to a range of 290 kilometers.

The Strategic Plans Division director general appreciated the operational preparedness of the Army Strategic Forces Command for displaying a very high standard of proficiency in handling and operating the weapon system. He also expressed full confidence in the robust Strategic Command and Control System, and the capability of strategic forces.