Pakistan govt not to make any arrangements for Hajj: Saudi Arab 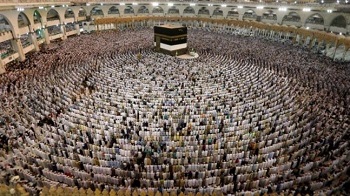 ISLAMABAD: The government of Saudi Arabia on Thursday asked the Pakistan government not to make any arrangements regarding accommodation and travelling of the intending pilgrims for the upcoming Haj in view of the coronavirus outbreak till final decision is taken by the Kingdom.

Saudi Minister for Haj and Umra Dr Mohammad Saleh Bin Taher Bentan addressed a letter to his Pakistani counterpart Noorul Haq Qadri to convey that any agreement or arrangements regarding transportation and accommodation of intending pilgrims should be deferred. “No agreements for the Haj 1441 should be made till situation for coronavirus is known,” the Saudi minister said.

He assured Noorul Haq Qadri that the Saudi government is keeping a close eye on the spread of virus, its consequences and is also taking care of precautionary measures. “We will inform you about any progress made in this connection,” he said.

The Saudi minister pointed out that there was a need to ensure safety of intending pilgrims arriving at the two Holy Mosques in view of recommendations of health organisations following worldwide spread of coronavirus.

The Spokesman for the Ministry of Religious Affairs, Imran Siddiqui, while talking to a private television channel said that different options might be considered for the upcoming Haj. “We will hold fresh balloting if the Saudi government decides that reduced number of faithful will perform Haj this year,” he said.