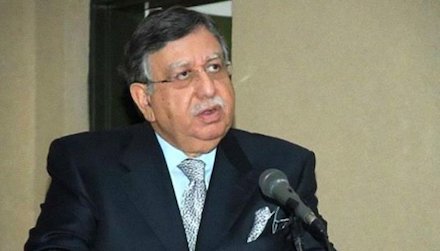 ISLAMABAD: Minister for Finance Shaukat Tarin on Thursday said that Pakistan’s GDP growth stood at 3.94 percent against the envisaged target of 2.1 percent, remittances made a historic record and exports would be touching $25 billion in the outgoing fiscal year, he unveiled Economic Survey 2020-21.

He said economy is stabilising and now the focus will be shifted to increasing production. He said increase in public debt was less as compared to the previous year. He said revenue collection was better than projections. He said focus will be put on the poor in the next budget.

The Economic Survey 2020-21 explained that the revised series of per capitawill be compiled after receipt of projected population from National Institute of Population Studies (Nips).

“The economic recovery helped the government to achieve a provisional GDP growth rate of 3.94 percent in the wake of improved agriculture and large-scale manufacturing sectors. Initially the COVID-19 outbreak affected the jobs of over 20 million but the decision of smart lockdown regained jobs and only 2 million jobs were affected. Pakistan has become net importer of food items instead of net exporters and there is need to bring a paradigm shift in it,” Shaukat Tarin said while launching the Economic Survey for 2020-21.

Accompanied by Minister for Industries Khusro Bakhtyar, Adviser to PM on Commerce Abdul Razak Dawood, Special Assistant to PM on Finance and Revenue Dr Waqar Masood and others, the minister said that the impact of the government's timely and appropriate measures is visible in the form of a V-shaped economic recovery on the back of broad-based growth across all sectors. The minister said that the remittances were projected to make a record of $29 billion mark in the outgoing fiscal year.

The minister admitted that higher inflation and the power sector were major challenges for the incumbent regime. However, he did not mention figures of investment to GDP and savings to GDP ratio that had declined in the fiscal year 2020-21. The minister was of the view that Pakistan had become net importer of wheat, sugar, pulses, palm oil and POL products and rising international prices resulted into higher inflationary pressures but the government did not pass on full prices of commodities and fuel except wheat otherwise the inflation might have gone further. The minister elaborated that the sugar price went up by 58 percent in the world, but Pakistan passed on 20 percent hike on consumers.

Shaukat Tarin said that the pace of accumulation of public debt reduced in outgoing fiscal, but did not mention that the debt to GDP ratio improved mainly because of increased nominal growth and second appreciated exchange rate. The Economic Survey 2020-21 did not incorporate latest official figures on poverty and unemployment.

The provisional GDP growth rate for FY2021 is estimated at 3.94 percent, higher than the targeted growth of 2.1 percent, for the outgoing fiscal year. The GDP growth is based on 2.77, 3.57 and 4.43 percent growth in agriculture, industrial and services sector, respectively.

Moreover, GDP at current market prices stood at Rs47,709 billion, showing a growth of 14.8 percent during FY2021 over last year (Rs41,556 billion). While in the dollar term, it remained $299 billion which is higher than its value recorded last year ($263 billion).

The industrial sector has witnessed a remarkable turnaround largely because of accommodative policies by the government in the form of industrial support packages; relief to export-oriented industries, duty exemption under China-Pak Free Trade Agreement-II, electricity and gas subsidy for the export-oriented industries and tax exemptions for electric vehicles manufacturers. The strong growth in the construction and LSM sector is likely to further broaden the recovery through the spillover effect.

On the external front, the current account balance remained in surplus during the first 10 months of FY2021 due to strong growth in remittances and an ongoing pickup in exports. Remittances witnessed a remarkable growth as more formal channels were opted due to restrictions imposed on informal means in the wake of COVID-19. Most importantly, measures undertaken as part of anti-money laundering regulations in accordance with FATF recommendations have also facilitated a shift from informal to formal channels of sending remittances.

The large-scale manufacturing (LSM) performance has been much favourable during July-March FY2021 and witnessed 8.99 percent growth as compared to 5.1 percent decline during the same period last year. Out of 15 subsectors, nine posted growth during July-March FY2021. Textile and food beverages and tobacco, the top two sectors of LSM, grew by 5.9 and 11.7 percent, respectively. Coke and petroleum products, non-metallic mineral products, automobile and pharmaceuticals also grew by 12.71, 24.31, 23.38 and 12.57 percent, respectively. The mining and quarrying sector declined by 6.49 percent during FY2021, against 8.28 percent contraction last year. This sector is lagging behind despite huge potential.

The fiscal deficit was contained at 3.5 percent of GDP during July-March FY2021 against 4.1 percent of GDP in the same period of last year. The primary balance posted a surplus of Rs451.8 billion during July-March, FY2021 against the surplus of Rs193.5 billion in same period last year. The FBR tax collection stood at Rs4.2 trillion, registering a growth by 18 percent, in first 11 months. The FBR, the minister said, will be able to collect Rs4.7 trillion in outgoing fiscal year.

The non-tax revenue stood at Rs1,227.6 billion during July-March FY2021 against Rs1,324.4 billion in the same period of last year, showing a decline of 7.3 percent. The decline is mainly attributed to the absence of a one-off renewal fee for GSM licenses from telecommunication companies. Total expenditures grew by 4.2 percent during July-March FY2021 as compared with the growth of 15.8 percent observed in the same period of FY2020.

Shaukat Tarin during the press conference expressed optimism on increasing revenue collection of Federal Board of Revenue (FBR), saying that it touched Rs4.2 trillion during last 11 months, which was higher than 18 percent as compared the collection of corresponding period of last year.

The Economic Survey has also revealed on how COVID-19 has impacted the lives of people and rendered them jobless, saying around 22.71 million people lost their jobs due to adverse impact of coronavirus on the economy.

As per statistics, prior to COVID-19, the working population was 35 percent (55.75 million). However, in pandemic closure of economic activities due to imposition of lockdown for health safety, this number declined to 35.04 million which indicates people either lost their jobs or were not able to work.

In July 2020, the government announced package for construction sector. Thus opening of sectors in which daily wagers were working along with fiscal stimulus and monetary measures made economy to recover. It was reported that 33 percent (52.56 million resumed working.

The COVID-19 pandemic does have devastating effect not only on human life but it has also come across as an unprecedented challenge to the public health and economic growth. Pakistan has also borne the economic brunt of COVID-19 pandemic that resulted in negative growth of -0.47 percent in FY20, job losses, falling income and deteriorating social indicators.

The COVID-19 pandemic hampered economic activities in construction and manufacturing sectors due to decline in consumer, business confidence and production and supply chain disruptions. It is estimated that 80 percent worker lost jobs/could not find work and received lower income in construction sector. People were reluctant to invest in this sector. Further, manufacturing sector observed disruption in production because of contraction in demand resulting 72 percent worker either lost jobs/could not find work or faced decrease in income.

In addition, the present government imposed strict lockdown which hampered wholesale & retail business and transport & storage business leaving 63 percent and 67 percent people to become jobless or had lower income respectively. Prudent government strategies and timely interventions have put economy on the trajectory of recovery and save the nation from very severe impact of COVID-19 pandemic. Further, construction sector package and industrial relief packages are other key initiatives of the government resulting recovery of all segments of the economy from the shock.