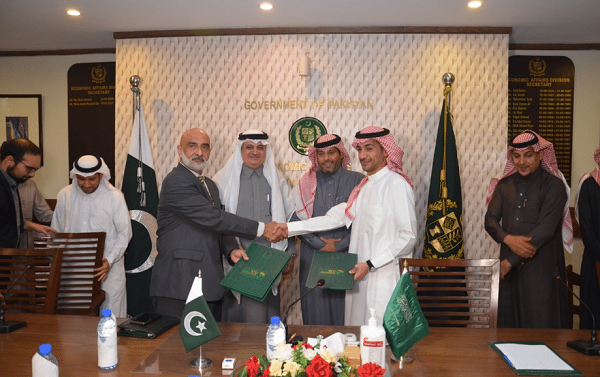 ISLAMABAD: Pakistan on Thursday signed an agreement with the Saudi Fund for Development (SFD) for suspension of debt servicing of $846 million for six years under the G20’s Debt Service Suspension Initiative (DSSI).

The total amount of Pakistan’s external debt that has been suspended and rescheduled under the DSSI framework, covering the period from May 2020 to December 2021, is about $3.688 billion.

Islamabad has already signed 80 agreements with 21 bilateral creditors for the rescheduling of its debts under the G20’s DSSI framework, amounting to rescheduling of $2.088bn. The signing of agreement with the Saudi Fund for Development brings the total rescheduled amount to $2.934bn. The negotiations for the remaining $754 million are underway and agreements are expected to be signed with respective bilateral development partners within the current fiscal year, the ministry of economic affairs said.

Pakistan’s total debt payable to 11 of G20 nations stands at about $20.7bn under 155 loans. Pakistan does not have any loan from other nine members.

The DSSI was encouraged by World Bank and the International Monetary Fund following the outbreak of Covid-19 two years ago.

The framework agreement on debt suspension was signed on behalf of Pakistan by the secretary of the Ministry of Economic Affairs, Mian Asad Hayaud Din, at a ceremony attended by Ambassador of Saudi Arabia to Pakistan Nawaf bin Saeed Al-Malkiy and Dr Saud Ayid R. Alshammari, SFD’s Director General for Asia.

The framework agreement had already been signed by Dr Khalid S. Alkhudairy, the CEO of SFD in Saudi Arabia and dispatched to Pakistan.

This debt amount was due to be paid during May 2020 to December 2021 under the original plan but was suspended by G20 under the DSSI to support poor countries weather tough financial conditions following international economic slowdown amid Covid-19 restrictions.

The amount will now be repaid over a period of six years starting from 2022 in semi-annual installments. Due to the support extended by the Saudi Fund for Development — one of the major bilateral development partners of Pakistan — along with other bilateral creditor countries, the G20’s DSSI has provided the fiscal space which was necessary to deal with the urgent health and socioeconomic needs.