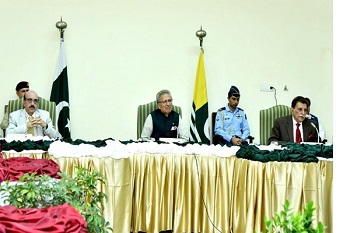 MUZAFFARABAD: Strongly condemning unrelenting repression in held Kashmir and ceasefire violations across the Line of Control, President Dr Arif Alvi on Tuesday assured the Kashmiris that Pakistan would never leave them alone in their just struggle for right to self-determination.

“The way India is discriminating against Indian Muslims, has unleashed terror on the freedom-seeking Kashmiris amid eight months long lockdown and is shelling at the innocent civilians along the LoC is extremely condemnable and warrants urgent attention of the UN Security Council,” said the president at a ‘media talk’ during his brief visit to the Azad Jammu and Kashmir (AJK) capital.

The media talk was held at the president house here where only correspondents of state-run media were invited. Later, a press-note was issued by the AJK Press Information Department for other media outlets.

The president also called upon the UN Secretary General to take notice of how brazenly India had shown disregard to “his appeal to the world to stop repression during the pandemic”.

“I want to directly tell the people of occupied Jammu and Kashmir that do not consider yourselves alone in these testing times. You have suffered far more atrocities than what are being now faced by the Indian Muslims…But little concern was shown by the world, as first your struggle was brushed off under the cover of terrorism after 9/11 and of late it is being hushed up under the cover of Covid-19,” maintained the president.

“But don’t lose hearts. Carry on your struggle with unity, discipline and power of faith. We are with you and will remain with you till death. Pakistan will continue its endeavours for your emancipation on all fronts,” he added.