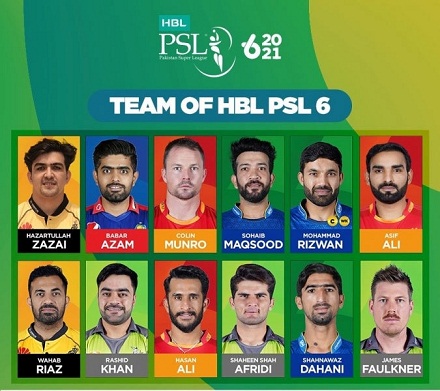 LAHORE: The Pakistan Cricket Board on Friday announced the Team of HBL Pakistan Super League 6, which includes three players each from Islamabad United and Multan Sultans, two each from Lahore Qalandars and Peshawar Zalmi, and one from Karachi Kings.

Mohammad Rizwan, who led Multan Sultans to their maiden title, has been named captain of the team. The wicket-keeper/batsman was the second highest run-getter with a tally of exactly 500 from 12 matches, after Karachi Kings’ Babar Azam, who amassed 554 runs in 11 matches. Rizwan’s team-mates Sohaib Maqsood and Shahnawaz Dahani — top wicket-taker in PSL 6 with 20 victims — were also included in the line-up.

Peshawar Zalmi’s representatives are opener Hazratullah Zazai, who aggregated 212 runs from five matches with a strike rate of 185.96 along with his captain Wahab Riaz, while Islamabad United trio of Hasan Ali, Colin Munro and Asif Ali were also included.