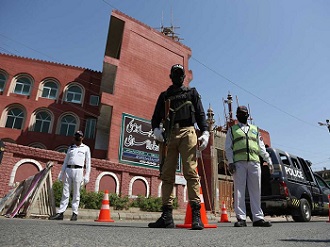 LAHORE: The Lahore police enforced a strict lockdown in the provincial capital on Sunday to restrict the movement of public following the sudden rise in the COVID-19 cases across the country, including Punjab.

The citizens were not allowed to commute freely on major arteries of Lahore, including The Mall, Jail Road, Ferozepur Road, Davis Road, Liberty and Gulberg areas, as police pickets were once again increased in the capital. The decision to enforce the strict lockdown was made as the people started taking the deadly coronavirus quite easy for the last some days that resulted in sudden increase in COVID-19 patients in the city.

According to details, long queues of vehicles and traffic mess could be witnessed on major roads of Lahore, including The Mall and Jail Road, due to the increased number of police check-posts where the citizens were asked in detail about the reason they came out of their homes despite the fact that lockdown was in place by the government. Pillion riding was completely banned on motorbikes while more than two persons were not allowed in the four-wheel. According to SSP Operations of Lahore Police Faisal Shehzad, a large number of people came on the roads on Sunday due to the holiday and therefore the police had to take action in order to ensure the social distancing to contain the deadly virus. He said that the strict measures were taken in the interest of people and therefore those who are commuting without any purpose are being forced to return back to their homes. Strict measures were also seen at the entry and exit points of Lahore while security was tightened at all the 122 police pickets in the city following the rise in COVID-19 cases.

It is pertinent to mention here that Pakistan recorded highest single day jump of positive cases of corona in last 24 hours with nearly 1000 new cases. It is the highest jump in the cases since February 26 when the first case was reported in the country. In Lahore, 244 new cases were reported in last 24 hours taking the tally to 1187 with 36 deaths in the city. Unfortunately, 20 police officials deputed at the check posts were also tested positive in Lahore while over a dozen employees of a private news channel were also tested positive in Lahore in last two couple of days. There are 5378 positive cases in Punjab with grim tally of 81 deaths in the province so far. The doctors were also demanding a strict lockdown in the whole country as the government eased it with the ‘smart lockdown’ as it allowed some sectors to operate. The medics-the frontline soldiers in this war are being affected with the virus rapidly with 92 health professionals tested positive in last two days in the country. So far, 93 health professionals are tested positive in Punjab including 55 doctors, 16 nurses and 22 paramedics and support staff.

Speaking at a press conference at the Governor’s House on Sunday, Punjab Governor Chaudhry Sarwar also warned that the government will be left with no option but to take stringent measures, if people did not take coronavirus pandemic seriously. “Easing lockdown to allow selected businesses does not mean that the threat of coronavirus has been averted,” he said. The governor said doctors were unanimous in saying that the incidence of coronavirus was getting serious. Chaudhry Sarwar said the government would take strict action if precautionary measures were compromised at any public place including mosques to save Pakistan from facing the US and the UK-like situation. He was of the view that it was unfortunate that people were not taking the current tough situation seriously and added that easing of lockdown did not mean that the coronavirus had been controlled.