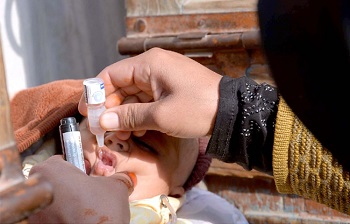 ISLAMABAD: The year’s first nationwide polio vaccination drive is set to begin on Monday (today), apart from Karachi where the campaign began a week ago, aiming to vaccinate approximately 39.6 million children. The campaign will involve nearly 265,000 polio workers going door-to-door to inoculate children under the age of five.

Just a few days ago, the National Institute of Health confirmed five more polio cases from Khyber Pakhtunkhwa and Balochistan, bringing the tally for the current year so far to 17. Last year, 144 cases were reported nationwide, 12 in 2018 and eight cases in 2017.

“Building on the successful national campaign in December last year, the nation is all set to undertake aggressive measures to push the virus back during 2020, setting the stage to root out polio from the country once and for all,” claimed Special Assistant to the Prime Minister on Health Dr Zafar Mirza.

“We have critically reviewed our performance during the last campaign and worked with provincial and district teams for even better preparedness for the upcoming vaccination effort,” he added.

Coordinator of the National Emergency Operations Centre (EOC) Dr Rana Muhammad Safdar said that the current geographical spread and the intensity of the virus transmission posed a real risk to children across the country.

“Reaching every child during the nationwide door-to-door campaign would provide a much-needed immunity boost to our children and ensure they stay protected from lifelong paralysis. Learning from 2019, we have the firm resolve to turn the situation around in 2020,” he said.

To benefit from a decrease in temperatures across the country as the cold weather makes it tough for the virus to survive, the polio eradication programme scheduled three back-to-back national campaigns during the months of December, February and April with two additional rounds in high-risk districts during January and March.

The EOC is also deploying 50 experts as facilitators across critical areas of the country to support anti-polio campaign workers in administering two drops of oral polio vaccine to every child during the February national campaign.

The programme has also launched “Sehat Tahafuz Helpline 1166” with local language capacities through which the public can report children who have not been vaccinated due to any reason.