Power-wealth-money never be a compensation for martyrdom: COAS 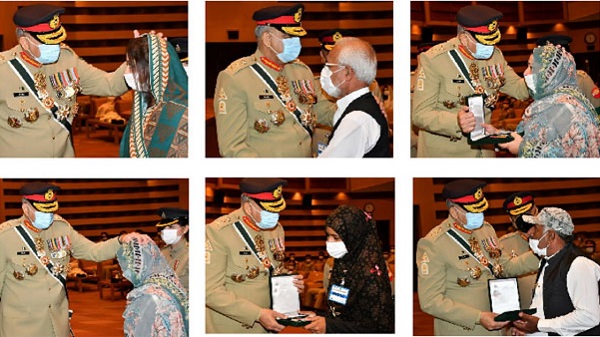 RAWALPINDI: Chief of the Army Staff (COAS) General Qamar Javed Bajwa Wednesday said that power, wealth and money could never be a compensation for martyrdom of the armed forces personnel. He was addressing the GHQ Investiture ceremony, which was held at the General Headquarters here.

The army chief said Pakistan achieved successes against the menace of terrorism because of the sacrifices of Shuhada, Ghazis and their families. He said that the world community acknowledges that Pakistan Army was the only army which rooted out terrorism and also wonders if that success was possible.

"I used to tell the world that we achieved such a big success against terrorism which no other county can do because we have mothers and father, children and women who are always ready to sacrifice their sons, fathers and husbands for their motherland,” he said adding that he was confident that no power of the world could harm Pakistan till such mothers, fathers, wives and children are here.

The COAS said that it was due to the sacrifices of officers, JCOs and soldiers that we sleep in peace in our homes. "I assure families of Shuhada that we will not disappoint you," General Bajwa said.

He said that the real national heroes were the Shuhada and Ghazis, and the nations which forget their Shuhada and heroes cease to exist. "Now it is our responsibility to look after parents, families of Shuhada, which we have been doing and will continue to do so,” Gen Bajwa said. He said as the Holy Prophet (SAW) said in a Hadith that Almighty Allah grants Maghifrat to a Shaheed before the first drop of his blood falls on soil. "Not only that a Shaheed gets Maghifrat for himself but also opens doors of heaven for his family and his name also continues to shine in this world," he said.

The COAS said that troops of Pakistan Army were also serving the people of Balochistan, who were suffering from cholera, providing them safe drinking water without waiting for his orders. "We feel proud of serving our nation," he added.