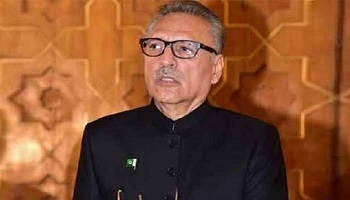 MUZAFFARABAD: President Dr Arif Alvi on Tuesday said the incidence of the novel coronavirus (Convid-19) in Azad Jammu and Kashmir (AJK) was negligible with only one known case quarantined in Mirpur and expressed the hope that people would zealously practice precautionary measures to keep the pandemic away from their motherland.

Speaking to AJK President Sardar Masood Khan by telephone, he, however, showed serious concern about the condition of the people of India-held Kashmir who were already under siege and lockdown amid denial of basic civic facilities.

According to a handout issued by the office of Mr Khan, President Alvi made the call to inquire about the welfare of the people in AJK as well as the state of preparedness and response to combat the pandemic.

Mr Khan apprised President Alvi of the elaborate arrangements put in place by the government, including screening at entry points, quarantine and isolation of suspected persons, amidst a statewide lockdown for three weeks.

According to the AJK health authorities, five fresh suspected samples were sent to the National Institute of Health (NIH) Islamabad over the past 24 hours, raising the total number of suspected cases to 65.

Of the 42 received reports, only one person had tested positive and was under treatment at a quarantine centre in Mirpur, the authorities said on Tuesday, adding they were expecting to receive the remaining 23 results from the NIH “within a day or two.”

Mr Khan told President Alvi that authorities were laying special focus on the persons who had returned from abroad or had a history of severe respiratory tract infections.

Regarding the situation in India occupied Kashmir, he said it was difficult to ascertain authentic data with regard to the coronavirus cases because of the communication blockade.

However, scanty reports coming out from the occupied territory suggested that Covid-19 information blackout itself was hitting people hard, he added.

According to these reports, Mr Khan said, confirmation of some positive cases had created panic and the situation had been compounded because of the restrictions on the internet which was hampering timely relay of medical information and intervention.

Like the rest of India, reportedly, the occupied territory was also facing shortage of doctors, paramedics and the requisite facilities to deal with the pandemic, Mr Khan told the president.