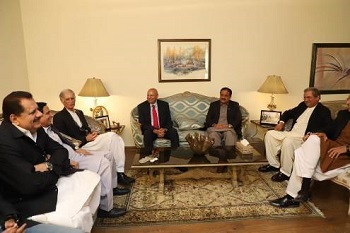 The committee had also invited Defence Minister Pervez Khattak as well as Planning and Development Minister Asad Umer to be part of the meeting.

Speaking to reporters after the meeting, Elahi maintained that several issues were discussed during the meeting. “Each government faces a different set of challenges. Therefore, whatever situation arises, we will face it together, and with mutual consultation and discussions, will try to find a solution.” He added that the PML-Q wants the “change” witnessed during the tenure of Prime Minister Imran Khan to benefit those at the tail end. “There has been a lot of talk on where the bottlenecks are and how they can be resolved. But one thing is very clear; we do not have any doubts about the leadership, intentions, and struggle of Imran Khan. We (PML-Q) want our union with [the PTI] to continue till the next elections so that we can stand before the people after offering solutions to their problems,” he said, adding that then the people will know that they can deliver.

Meanwhile, Defence Minister Pervez Khattak stated that the misunderstanding regarding the government’s allies jumping ship had been removed.

“None of them are abandoning us,” he said, adding that the issues between the government and the PML-Q were small and “insignificant”, but were blown out of proportion.

“We were in contact throughout this whole process. We were partners before and will continue to be partners,” he said, adding that the purpose of today’s meeting was to dispel the misunderstandings that there were major differences between the two parties. “There were some issues that were resolved after sitting down. If you don’t take your allies on board, the situation can worsen. Therefore, we will carry out decisions after mutual consultation,” he said.

“Issues will keep cropping up, they crop up in our homes too, but we will have to settle them. We assure the people that this partnership will last for the next three years,” Khattak maintained. Earlier, PML-Q senior politician Moonis Elahi also said that his party would not let the federal government get derailed under any circumstances.

In his media talk before the PTI-PML-Q meeting, Moonis ruled out any possibility of “minus-one” formula as acceptable to his party. “The government’s committee has accepted most of our demands,” he said. “The new committee has also approved the matters resolved with the previous committee.”

The PTI government’s relations with its important ally in Punjab, the PML-Q, had gone sour after Imran had abruptly changed the committee (led by senior leader Jahangir Tareen) working on addressing the administrative and development issues being confronted by the coalition partners in Punjab and the Centre.

It had emerged that the PML-Q wanted to have its administrative share of the districts in Punjab, where it had its political base with winning MPAs and MNAs. Since the change, the PML-Q leadership wanted that several decisions, including due share in the administrative power through bureaucracy, agreed upon with the Tareen committee, be implemented.

Last week, Shafqat Mahmood had made a personal visit and held an informal meeting with Elahi to discuss the party’s reservations and gauge the level of resentment in the PML-Q ranks. Last Thursday, the Punjab governor and chief minister visited Islamabad and attended a joint meeting of the new committees constituted by the prime minister.

The Tareen-led committee had reportedly also agreed to empower two PML-Q ministers in Punjab and one at the Centre and the ally party leadership wanted to implement the earlier agreed upon decisions, which were recorded in minutes too. After the formation of the new committee, Elahi, who was spearheading the talks with the PTI, had expressed his strong resentment over non- implementation of the agreement and given a week’s deadline for its implementation. The PML-Q leader had also threatened that it could review its alliance with the government in case the commitment was not honoured.