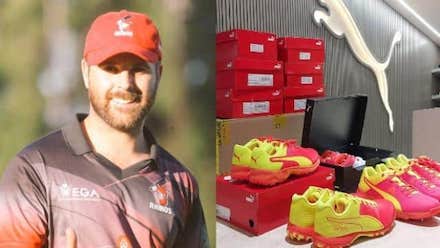 ZIMBABWE: Puma Sportswear brand has decided to sponsor shoes for the Zimbabwe cricket team after one of its players lamented on having to use glue to fix shoes at the end of every series.

It all started when Zimbabwe cricketer Ryan Burl tweeted on Sunday: "Any chance we can get a sponsor so we don't have to glue our shoes back after every series."

Puma responded to Burl's tweet saying, "Time to put the glue away, I got you covered."

An excited Burl thanked the brand for "reaching out", saying he could not "wait to join the Puma Cricket team".

On Monday, Puma shared a picture of the red and yellow coloured shoes — resembling the Zimbabwe kit — with the caption: "Express shipment for [Ryan Burl] and his mates. I hope the colours match the jersey."

Fans of the game were predictably excited about the announcement with Zimbabwean netizens thanking Puma for the gesture. The brand was also praised by other cricketers.

Former Indian cricketer Yuvraj Singh said, "Now that’s what Puma stands for!" Indian off-spinner Harbhajan Singh said Puma was "always there for the players". Writer Amir Malik termed it a "wonderful gesture" and said it was worth applauding.