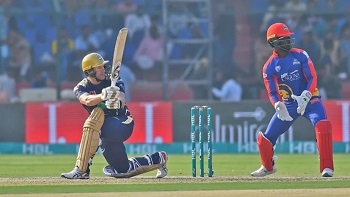 KARACHI: An 85-run partnership for the fourth-wicket between Sarfaraz Ahmed and Azam Khan helped Quetta Gladiators defeat Karachi Kings by five wickets in the sixth HBL Pakistan Super League5 fixture at Karachi’s National Stadium here Sunday. Chasing victory target of 157, defending champions Quetta raced home with an over spare. Azam top-scored in the run chase with a 30-ball 46 and struck four fours and two sixes. He was declared player of the match for his match-defining innings. Quetta captain Sarfaraz remained not out on 37 which came off 28 balls. With 27 off 20, which included two fours and two sixes, Shane Watson was the other notable run-getter for the winners.

Earlier, pacer Mohammad Hasnain took three wickets for 33 runs and Tymal Mills returned two for 30 which limited the home side to 156 for nine after Karachi’s captain Imad Wasim elected to bat. Karachi came into the match with an opening combination of world’s best T20I batsman Babar Azam and left-handed hard-hitter Sharjeel Khan. Sharjeel was silenced by Quetta’s bowling as he scored only six runs off 12 balls, managing a strike rate below his usual one, before being caught and bowl by left-arm spinner Mohammad Nawaz. Babar, who has been the man-in-form for quite a long time for whichever team he plays, was however the first man to go, before Sharjeel as he scored 26 off 23 balls courtesy five boundaries. He was bowled out by left-arm pacer Mills Iftikhar Ahmed, batting at six, struck two fours and six in his 25 off 18 towards the end of the innings to take his side to a competitive total. Alex Hales, playing his first PSL match this season, was the top-scorer in Karachi’s innings with a 27-ball 29, which included a four and a six. Quetta now have two wins this season and they travel to Rawalpindi to take on Islamabad United in Rawalpindi on Thursday.