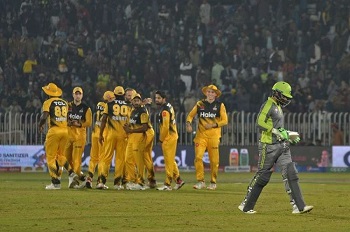 RAWALPINDI: The HBL Pakistan Super League action was badly disrupted on Friday after intermittent rains in the twin cities curtailed the second game of the Rawalpindi leg between 2017 champions Peshawar Zalmi and the Lahore Qalandars to a 12-over affair at the Pindi Cricket Stadium.

Lahore Qalandars’ miserable run in the fifth edition continued as they capitulated to a third straight defeat after failing to chase down 133, losing by 16 runs in what was their eighth loss in nine fixtures against Peshawar Zalmi in PSL history.

In contrast to the enthralling clash on Thursday in which defending champions Quetta Gladiators upstaged Islamabad United by five wickets, this fixture was a helter-skelter affair all the way after the start was delayed by almost two hours owing to intermittent rains. It had started raining just after midnight on Thursday and persisted through Friday, wrapping the ground in gloom.

The diligent ground staff worked round the clock to make the arena as dry as possible and their efforts finally paid off when umpires Ranmore Martinesz and Tariq Rasheed decided to start the match at 9.55pm. Their biggest worry was a patch at the Media Centre End that looked quite damp and soft.

Amidst the pall of gloom, a sizeable crowd which had waited for hours was treated to blazing strokes upfront from the bat of Tom Banton, a highly-rated England batsman. Coming into this fixture on the back of a couple of failures, he made his intentions clear by slicing Shaheen Shah Afridi over third man fence for a six before depositing Salman Irshad, who had replaced an injured Haris Rauf, over fine leg for another six.

The Lahore Qalandars, however, put an end to Banton’s 15-ball cameo of 34 when David Wiese induced a mis-hit from the right-hander. Fakhar Zaman pouched the catch just inside the midwicket boundary.

Haider Ali, the Pakistan Under-19 star, outdid Banton in big hitting and promptly thrashed four sixes — one each off Salman and Wiese and two in three deliveries off young leg-spinner Maaz Khan.

Peshawar then began to lose momentum, losing three wickets — Liam Livingstone, Haider and Mohammad Mohsin — for the addition of just one run as Faisalabad-born paceman Dilbar Hussain struck twice in one over to lead a brilliant comeback from the Qalandars.

Dilbar went on to claim a career-best haul of 3-24 from three overs. His final wicket, that of Sammy, came via a stunning catch on the run by Shaheen at third man.

Chris Lynn got the Qalandars’ chase off to a blistering start. The Australian left-hander greeted Hasan Ali into the attack by taking three boundaries in four balls.

In between luck also sided with the Qalandars when Fakhar was bowled by Wahab Riaz, but television replays showed he had overstepped.

Lewis Gregory, however, restored parity when his seamers had Lynn (30) and Mohammad Hafeez (one) taken in the deep. The veteran Pakistan batsman fell to a fine catch by Banton at midwicket. And when Fakhar (22) holed out to Livingstone, Zalmi were back in control.

With the asking rate now close to 12 runs an over, Samit Patel rekindled their hopes after thrashing five fours and a six to make a whirlwind 34 not out.

Gregory then got rid of Sohail to finish with 3-25 and capped off a memorable night by collecting the Man of the Match award in his 100th appearance in T20 cricket.