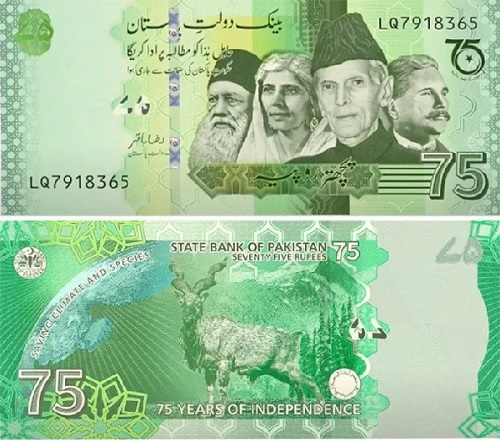 KARACHI: The State Bank of Pakistan (SBP) has issued a commemorative banknote of Rs75 for remembrance of 75th anniversary of Pakistan’s independence, a statement said on Thursday.

The design of the banknote was unveiled on August 14, 2022, during a ceremony at SBP headquarters, Karachi. The note would be available for the general public from SBP BSC offices and commercial banks’ branches from Thursday, the central bank said.

The commemorative note is legal tender under section 25 of the SBP Act, 1956, and can be used as medium of exchange for all transactions across Pakistan.

“This is the second commemorative banknote issued by SBP after issuance of first commemorative note issued to mark the fifty years of independence of the country in 1997,” SBP statement stated.

The themes and concepts for both the obverse and reverse sides of the banknote were developed by SBP and local artists.

The commemorative banknote has been designed to pay tribute to the leaders contributing towards creation of Pakistan and create awareness about climate change and its impact on the environment.