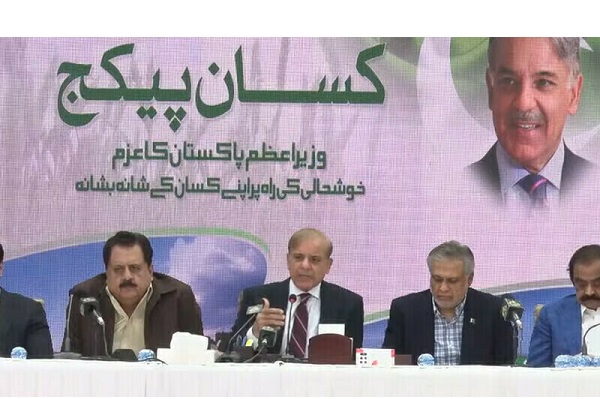 ISLAMABAD: Prime Minister Shehbaz Sharif on Monday announced a special Kissan Package worth Rs1800 billion to facilitate farmers who will be provided loans, sufficient availability of fertilizers on reduced rates and reduction in electricity tariff to fix rate of Rs13 per unit for around 300,000 agricultural tube-wells across the country.

Announcing the package at a press conference, the prime minister said that as compared to previous year the increase in these loans is Rs400 billion and a subsidy of Rs43 alone on reduction in electricity tariff for tube-wells. The prime minister, while announcing the Kissan Package, focused on topic of the presser and avoided to take political questions at the end. Federal ministers Senator Ishaq Dar, Tariq Bashir Cheema, Rana Sanaullah and Marriyum Aurangzeb were also present.

The prime minister said to facilitate the farmers, the coalition government would provide Rs10.6 billion loans to small farmers across the country while small farmers of flood-hit areas would get Rs80 billion loans. The premier said the mega package also includes loans worth Rs50 billion for the youth of rural areas who want to invest in agriculture sector. For this purpose, the government would provide Rs6.4 billion as a subsidy to waive off mark up on these loans.

He said under this package Rs5 billion has been reserved to provide subsidy on mark-up of loans that will be provided to landless peasants of the flood affected areas, adding that 1.2 million bags of certified seed would also be provided to the farmers of flood-hit areas.

The prime minister said Small and Medium Enterprises (SMEs) would be regularised for investment in agriculture sector. The SME’s interested in investment in this sector will be able to get loans on subsidized rates and for this purpose, an amount of Rs6.4 billion would be reserved while under their modernization scheme Rs10 billion were fixed.

The premier said keeping in view the increased prices of new tractors, the import of used tractors has also been permitted and now the farmers could also import second hand tractors up to five years of their manufacture date.

Shehbaz Sharif also announced import of five hundred thousand tons of Urea. He said the import of 200,000 tons of urea has been completed while the remaining will be completed and for this purpose a subsidy of Rs30 billion would be provided. The prime minister further said it has allowed to import 2.6 million tons of wheat out of which one million tons has already reached Pakistan while the remaining 1.6 million tons would be procured to avert any kind of shortage of this commodity in the country.