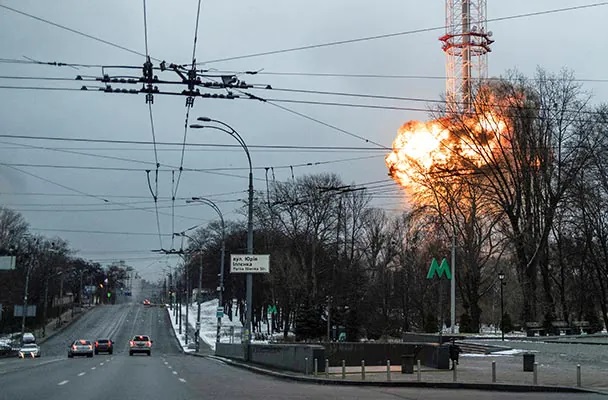 KYIV: Ukraine struggled on Thursday to repair its battered power and water services after Russia targeted the electricity grid with dozens of cruise missiles and temperatures plunged.

The Ukrainian energy system is on the brink of collapse and millions have been subjected to emergency blackouts for weeks due to systematic Russian bombardments of the grid.

The World Health Organisation has warned of “life-threatening” consequences and estimated that millions could leave their homes as a result.

Mayor Vitali Klitschko said more than two-thirds of the capital was still cut off despite municipal workers in Kyiv restoring some water service overnight.

“Seventy percent of the capital remains without electricity,” Klitschko said. “Energy companies are making every effort to return it as soon as possible,” he added.

Kyiv shivered on Thursday as temperatures hovered just above zero degrees Celsius (32 degrees Fahrenheit) with some rain. Ukraine’s military accused Russian forces of firing around 70 cruise missiles at targets across the country on Wednesday and of deploying attack drones.

Ten people were killed and around 50 wounded, Ukrainian Prosecutor General Andriy Kostin told local media. But Russia’s defence ministry denied striking any targets inside Kyiv and said damage in the capital was the result of Ukrainian and foreign air defence systems.

“Not a single strike was made on targets within the city of Kyiv,” it said. Moscow’s targeting of power facilities is their bid to force capitulation after nine months of war that has seen Russian forces fail in most of their stated territorial objectives.

“So many victims, so many houses ruined,” 52-year-old Iryna Shyrokova said in Vyshgorod on the outskirts of Kyiv after Wednesday’s Russian strikes.

“People have nowhere to live, nowhere to sleep. It’s cold. I can’t explain it. What for? We are also human beings,” she said, calling it “the scariest day”.

This month Moscow’s troops withdrew from the only regional capital they had captured, destroying key infrastructure as they retreated from Kherson in the south.

Kostin said Ukrainian authorities had discovered a total of nine torture sites used by the Russians in Kherson as well as “the bodies of 432 killed civilians”. He did not specify how they were killed. Wednesday’s attacks disconnected three Ukrainian nuclear plants automatically from the national grid and provoked blackouts in neighbouring Moldova, whose energy network is linked to Ukraine.

Ukraine’s energy ministry said that all three nuclear facilities had been reconnected by Thursday morning.

The governor of Kharkiv region — home to the country’s second largest city — said the eponymous city was suffering electricity supply issues and “emergency power shutdowns”. The head of the central region of Poltava, Dmytro Lunin, said authorities were “working around the clock to restore power”.

“In the coming hours, we will start supplying energy to critical infrastructure and then to the majority of households,” Lunin said. About 50 percent of central Dnipropetrovsk region had electricity, governor Valentyn Reznichenko said.