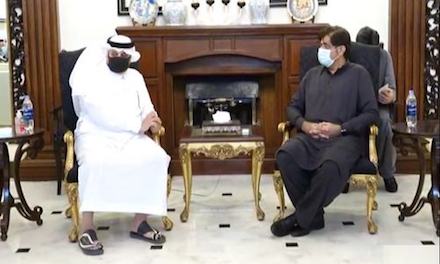 KARACHI: Saudi Arabia’s Ambassador to Pakistan Nawaf bin Saeed Al-Maliki has assured Sindh Chief Minister Syed Murad Ali Shah that he will take up with the Saudi authorities the issue of approval of Chinese Covid-19 vaccines to enable Haj pilgrims from Pakistan to visit Saudi Arabia, it emerged on Friday.

Official sources said the request for vaccines approval was made by the chief minister when the Saudi ambassador along with Consul General Bandar Al Dayal and a delegation of King Salman Relief Organisation called on him at CM House.

At the outset of the meeting, the chief minister of Sindh informed the ambassador that since Saudi Arabia had not included the Chinese vaccines for Haj pilgrims, a wave of disappointment prevailed among the people of Pakistan. The government had administered Chinese Covid-19 vaccines to citizens of Pakistan, the CM said.

“Now our people are quite upset that they would not be allowed to visit Saudi Arabia, as they have vaccination certificates for Chinese vaccines,” he said.