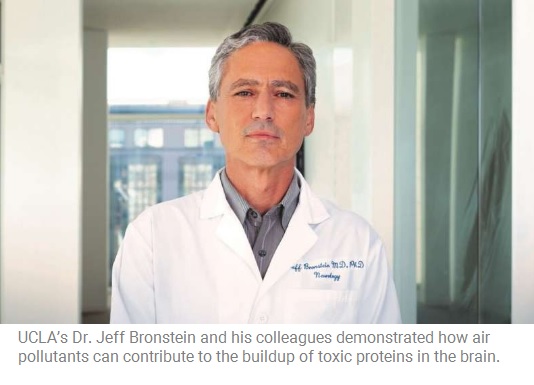 University of California, Los Angeles -UCLAs- Dr. Jeff Bronstein and his colleagues demonstrated how air pollutants can contribute to the buildup of toxic proteins in the brain.

A new UCLA study in zebrafish has identified the process by which air pollution can damage brain cells, potentially contributing to Parkinson’s disease.

Published in the peer-reviewed journal Toxicological Sciences, the findings show that chemicals in diesel exhaust can trigger the toxic buildup of a protein in the brain called alpha-synuclein, which is commonly seen in people with the disease.

Previous studies have revealed that people living in areas with heightened levels of traffic-related air pollution tend to have higher rates of Parkinson’s. To understand what the pollutants do to the brain, Dr. Jeff Bronstein, a professor of neurology and director of the UCLA Movement Disorders Program, tested the effect of diesel exhaust on zebrafish in the lab.

To confirm that diesel could have the same effect on human neurons, the researchers replicated the experiment using cultured human cells. Exposure to diesel exhaust had a similar effect on those cells.

“Overall, this report shows a plausible mechanism of why air pollution may increase the risk of Parkinson’s disease,” Bronstein said.

The study’s other authors are Sataree Khuansuwan, Daniel Juarez, Hiroma Murata and Jesus Araujo, all of the department of neurology in the David Geffen School of Medicine at UCLA.