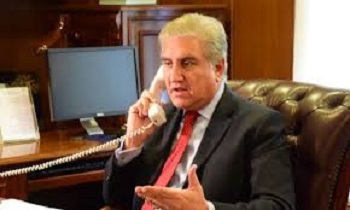 ISLAMABAD: Foreign Minister Shah Mahmood Qureshi held a telephone conversation with French Foreign Minister Jean-Yves Le Drian and discussed in detail the coronavirus pandemic as well as ways to enhance cooperation to combat the spread of the disease.

Expressing deep concern over the loss of precious lives, Foreign Minister Qureshi lauded the steps taken by the French authorities to contain the virus, and thanked his counterpart for looking after 13 Pakistanis affected in France. He also briefed Foreign Minister Le Drian about the measures underway in Pakistan to contain the outbreak, the Foreign Office said in a press release issues here on Tuesday said.

Foreign Minister Qureshi said the number of affected people in Pakistan due to COVID-19 is fast increasing. The disease has spread to almost all countries of the world and the situation demands a coordinated approach by the international community to combat its spread, he added.

In view of the situation in Iran, Foreign Minister Qureshi underscored the need for immediate lifting of sanctions and extending humanitarian assistance to enable Iranian authorities to save precious human lives. He also expressed concern over the fragile state of financial systems of the developing world.

To allow developing countries to cope with the crisis, and mitigate the economic fallout, he underlined the prime minister’s call for debt restructuring, and sought France’s support and understanding, as an important member of the EU, the G-7, and the UN Security Council, on these issues.

Foreign Minister Qureshi also held a telephone conversation with his Spanish counterpart Arancha Gonzales Laya and discussed matters related to the Covid-19 outbreak. He conveyed deep condolences over the loss of precious lives in Spain and commended the steps being taken by the Spanish authorities, and, in particular, lauded the heroic sacrifices of the Spanish healthcare workers. He also dilated upon the positive role of 100,000-strong Pakistani community in Spain standing in solidarity with their Spanish compatriots during the unprecedented crisis. Thanking Qureshi for the call, Foreign Minister Laya apprised him of the steps being taken by Spain to look after its citizens, including those of Pakistani origin. She appreciated the role being played by the Pakistani community in Spain. She said the situation in Iran was discussed at the EU foreign ministers meeting held on March 23 and also mentioned that the issue of debt relief to developing countries could be taken up at appropriate fora. The two ministers agreed that the best way to overcome the Covid-19 pandemic was to cooperate closely.

Foreign Minister Qureshi held a telephone conversation with his Bangladeshi counterpart AK Abdul Momen. The two ministers discussed the challenges faced by regional countries in the face of rapid spread of the COVID-19 pandemic and exchanged ideas on ways to combat the threat.

Foreign Minister Qureshi underscored that Pakistan considers SAARC an important platform for regional cooperation. Reaffirming Pakistan’s abiding commitment to the SAARC process, he reiterated Pakistan’s readiness to host the SAARC Health Ministers’ Conference to enhance cooperation among member countries and development partners in health sector with particular focus on COVID-19. He proposed that a video conference could be organized first in view of the prevailing situation.

Appreciating Pakistan’s offer, Foreign Minister Momen conveyed Bangladesh’s readiness to participate in the video conference. Discussing the need to share resources, it was underlined that SAARC COVID-19 emergency fund should be placed under the Secretary General of SAARC and the modalities for its utilization should be finalized through consultations at the earliest.