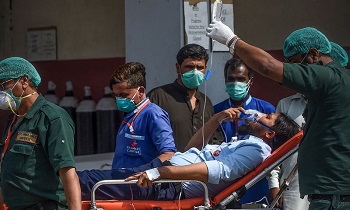 KARACHI: Sindh Health Department officially declared on Wednesday soybean dust the cause behind the incidents in Karachi's Kemari, in which around 14 people lost their lives while scores were hospitalised due to respiratory issues.

According to the press release, the Sindh Health Department stated that  soybean dust is more dangerous for asthma patients. The advisory cautioned people to use masks and ensure cleanliness.

Earlier on Wednesday, the unloading of soybean at Karachi Port was halted after a report called it the cause behind the deaths of more than a dozen Karachi residents.

According to a report compiled by the International Center for Chemical and Biological Sciences (ICCBS) at Karachi University, an aeroallergen from soybean dust was found in the blood samples collected from the people, who died after the suspected gas leakage in the city's Keamari area.

Earlier on Wednesday, a US ship identified as ‘Hercules’, docked at the Karachi port, was removed as its unloading of soybean was leading to air toxicity, however, the ship is still docked at one of the city’s ports.

Sources claimed that after the ship left for port Bin Qasim from Karachi port, there was a significant reduction in air pollution.

It was learnt that the ship carrying soybean reached Karachi on February 15. The citizens of Kemari railway colony started being affected by the aeroallergen since the evening of February 16.

Today, Sindh Information Minister Nasir Hussain Shah said there was no need for an immediate evacuation of the city’s Keamari area, where more than a dozen over the weekend after inhaling a lethal substance.

“An investigative team under commissioner Karachi has been constituted [to probe the matter],” Shah told Geo Pakistan. “Till the committee presents its reports, it is impossible to say anything.”

The provincial minister said the present situation in the Keamari area did not merit an evacuation.

He noted that those sickened after breathing in the noxious substance were being treated at various hospitals in the metropolis.

The death toll from what was initially suspected to be a gas leak (an official statement has yet to be made) rose to 14 on Tuesday, with 25 more brought to the hospital on Wednesday morning.

Separately, Mayor Karachi Waseem Akhtar told Geo Pakistan that he was not informed about the incident at a government level.

Criticising the provincial and the federal governments, Akhtar said the two should have taken the public into confidence over what had happened.

“They should have come on TV and informed the public about the cause of the gas leak.”

“Neither the Sindh nor the federal government seem serious about the situation,” he alleged.

When asked what the government planned to do for the families of the deceased and those affected, the mayor said the government did not have money to pay salaries to its own employees (let alone support victims).

A day earlier, a Sindh health department spokesperson had said the lethal substance had not been identified yet. The News had earlier reported that authorities suspected it was hydrogen sulphide — a highly poisonous gas that is a byproduct of crude oil and also generated in the sewerage system.

However, the theory was dismissed by Dr Seemin Jamali, spokesperson of the Jinnah Postgraduate Medical College.

Dozens of sick are still being treated at various public and private hospitals in the city due to the incident, which is now being believed as the outcome of a soybean dust allergy.

Globally, soybean is one of the eight food items that cause serious, sometimes lethal, allergy, Dr Rehman said, adding that the required safeguards were not there during the unloading process of the consignment at the port.

He said the ship carrying the consignment must be moved to the outer anchorage of the port to avoid further exposure.

A family arrives at a hospital after a suspected gas leak killed 7 people and sickened dozens of others in a coastal residential area in Karachi, Pakistan, February 18, 2020. Photo: AFP

A report compiled by the ICCBS at Karachi University found aeroallergen from soybean dust in blood samples collected from people who died.

According to the sources, the report mentioned that Spain had experienced a similar incident of soybean dust poisoning two years ago that affected numerous people in the country.

Senator Murtaza Wahab tweeted that preliminary reports submitted by experts at the Karachi University had claimed that the Keamari incident happened due to "overexposure to soybean dust".

"Preliminary report has been submitted by experts at Khi Uni which suggests that Keamari incident happened due to overexposure of soybean dust which is known to have also caused similar incidents in other parts of the world. This soybean is in a shipment docked at Khi Port," he tweeted.

On Tuesday residents of the area surrounding Karachi Port, including Keamari, had protested against the rising death toll and the growing number of people affected by the health disaster.

The demonstrators including traders and the neighbourhood's business community blocked various roads and held a sit-in on key routes near Jackson Market and nearby areas, bringing traffic to a standstill. Traffic police said vehicles were being rerouted to alternative streets.