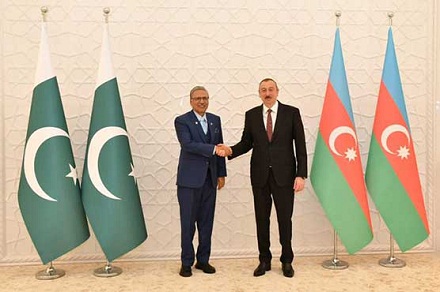 Pakistan strongly supports the sovereignty and territorial integrity of Azerbaijan and its stance on the Nagorno-Karabakh issue.

This was stated by Speaker National Assembly, Asad Qaiser, while meeting Minister for Foreign Affairs of Azerbaijan, Jeyhun Bayramov at Azri capital Baku.

During the meeting, the two sides discussed the prospects of enhancing cooperation in various fields.

The Speaker National Assembly also emphasized the need for operationalizing direct flights between Azerbaijan and Pakistan for promoting people-to-people contacts between the two brotherly countries.

He further underscored the importance of relaxation of visa policies particularly for the students on the two sides.

On this occasion, the Foreign Minister of Azerbaijan said that his country strongly supports Pakistan over its just and legitimate stance over the issue of Jammu and Kashmir.

He reaffirmed that Azerbaijan will continue to extend its support on Jammu and Kashmir issue at all international fora.