Taliban to sign peace deal with US by the end of this month: Afghan Taliban 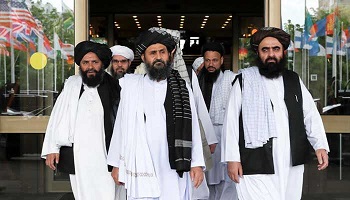 PESHAWAR: The Afghan Taliban said on Monday they had concluded peace talks with the US and are set to sign the peace deal by the end of this month.

“After many ups and downs, the peace talks with the US have finally been concluded in Doha. We agreed on certain major issues and could most likely sign the peace accord by the end of this month (February),” a senior Taliban leader privy to the peace talks told The News.

Pleading anonymity, he said both sides had decided to create a friendly environment in Afghanistan beforesigning of the peace accord and are expected to stop fighting for a few days.

According to the Taliban leaders, they could later extend the ceasefire or turn it into a permanent ceasefire.

Taliban said the peace deal signing ceremony will be held in Doha and they had decided to invite world leaders, including rulers of the Muslim countries, Europe, Afghanistan’s neighbours, NATO, UN, Organisation of Islamic Cooperation, and those involved in Afghanistan’s affairs one way or the other.

And after signing the deal, the Taliban leader said the first thing that the US will ensure is to free 5,000 Taliban prisoners, languishing in different jails in Afghanistan.

Taliban claimed their 11,000 prisoners are presently held in jails in Afghanistan. And in return, Taliban said, they would release 1,000 prisoners, majority of them are members of the Afghan security establishment.

A section of the media had earlier reported that the US and Taliban had agreed on ceasefire plan and decided to act on it from Monday, February 17, but Taliban proved it wrong by undertaking some deadliest attacks on foreign and Afghan security forces in Afghanistan.

Taliban commanders said on Monday their operations would go ahead until they receive instructions from top leadership based on a deal with the US to reduce violence in the country.

“We didn’t receive any message about a ceasefire from our leadership,” a Taliban commander in Afghanistan's Helmand province said.