Test between England-India cancelled due to Covid 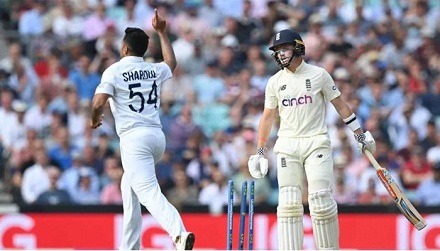 MANCHESTER: The fifth and deciding Test between England and India at Old Trafford in Manchester was dramatically cancelled on Friday just over two hours before the scheduled start because of coronavirus (Covid-19) concerns in the tourists’ camp.

The England and Wales Cricket Board (ECB) said fears over the coronavirus, related to an outbreak among backroom staff, had left India unable to field a team at Old Trafford.

Play was due to get under way at 11:00 am local time (1000 GMT) but the ECB announced the match would not take place.

India were 2-1 up in the five-match contest after a 157-run win in the fourth Test at The Oval and were bidding to complete a notable double just months after winning a series in Australia.

“Following conversations with the BCCI [Board of Control for Cricket in India], the ECB can confirm that the fifth Test between England and India men due to start today [Friday] at Old Trafford, will be cancelled,” an ECB statement said. “Due to fears of a further increase in the number of Covid cases inside the camp, India are regrettably unable to field a team.”

India cancelled their final training session and mandatory pre-match press conference on Thursday after reports that a physiotherapist who had been in close contact with the players had tested positive for Covid.

On Thursday evening it had appeared the match was going ahead when a fresh round of tests within the India camp produced a set of negative results.

But following talks between the ECB and BCCI the fixture was called off — the first home men’s international to have been cancelled in England since the start of the pandemic.

Reports said several Indian players had expressed concerns over the potential spread of the virus and were unwilling to play, meaning they could not put out a team.

The BCCI said in a statement that the boards had ‘jointly decided’ to call off the match and that it could not compromise the safety and wellbeing of players.

The status of the Old Trafford match — and with it the fate of the series — appears uncertain after the ECB retracted an initial statement that India had ‘forfeited’ the game.

Covid is an acceptable reason for cancelling a match under the regulations for the ICC World Test Championship if it has a significant impact on a side’s ability to field a team.

ECB chief executive Tom Harrison told Sky Sports: “The officials had tried to give players as many different assurances as we could but there was anxiety in the dressing room.”

He talked about potentially rearranging the fixture.

“The glass-half-full version of this is the prospect of us playing a one-off Test match against India as a focal point on this ground,” he said. “To come back and give fans the thing they’ve missed out on this time.

“Let’s try and work on that and see if we can deliver it. It would be wonderful. It would be the only good news that comes out of a day like today.”

The India squad has dealt with several Covid cases since Virat Kohli’s men arrived England in June for the inaugural World Test Championship final in Southampton, where they were beaten by New Zealand.

The first was in July when Rishabh Pant, the first-choice Test wicket-keeper, tested positive.

Rescheduling the fifth Test is complicated by the imminent re-start of the lucrative Indian Premier League Twenty20 tournament, which resumes in the United Arab Emirates on Sept 19.

The IPL, which started in India, was suspended due to the coronavirus pandemic earlier this year.

Former England captain Mike Atherton said the shadow of the IPL had ‘always been hanging’ over the fifth Test.

Meanwhile, the BCCI chiefs offered to reschedule the cancelled Test.

“The BCCI along with the ECB have jointly decided to call off the fifth Test match scheduled at Manchester in India’s ongoing tour of England 2021,” the BCCI said in a statement.

The BCCI said it had held talks with the ECB to find a way to play the game but Covid cases among backroom staff had forced their hand, adding that the wellbeing of players was ‘paramount’.

“In lieu of the strong relationship between BCCI and ECB, the BCCI has offered to ECB a rescheduling of the cancelled Test match,” the statement said. “Both the boards will work towards finding a window to reschedule this Test match.”