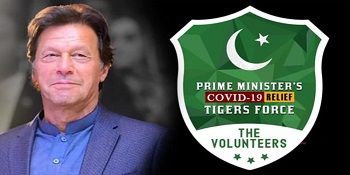 ISLAMABAD: The controversial one million-strong Corona Relief Tiger Force of volunteers will formally become operational in the country’s three provinces — Punjab, Khyber Pakhtunkhwa and Balochistan next week after a formal address to the CRTF members by Prime Minister Imran Khan expected in a couple of days.

The announcement that the CRTF would become operational only in the provinces ruled by the Pakistan Tehreek-i-Insaf (PTI) and its allies was made by Special Assistant to the Prime Minister (SAPM) on Youth Affairs Usman Dar during a news conference here on Thursday.

One the one hand, Mr Dar appealed to Sindh Chief Minister Syed Murad Ali Shah and urged the governments of Azad Jammu and Kashmir and Gilgit-Baltistan to allow the CRTF to carry out relief activities in the wake of the coronavirus pandemic within their respective jurisdictions and, on the other, he warned that if the federal government did not receive positive response by Mon­d­ay, the prime minister would himself make a decision on how services of the CRTF members would be used in these three regions.

Mr Dar said that the CRTF had been given two additional responsibilities of ensuring implementation of 20-point guidelines introduced by the federal government for prayers in mosques during Ramazan and supervising operations of the Utility Stores across the country.

Initially, the government had announced that major responsibilities of the CRTF members would be to point out hoarding, artificial inflation and violation of laws, ration distribution, public announcements and preparations for funerals, assistance in imposing of lockdown and awareness creation against coronavirus.

The SAPM said that the CRTF had already started working in his hometown Sialkot as a “test run” and the district police officer had deployed three volunteers of the CRTF at every mosque to ensure implementation of the agreed SOPs (standard operating procedures) during prayers time. He said there were 3,000 mosques in Sialkot district and, therefore, it had become difficult for the local administration to monitor all the mosques.

Similarly, he said, the tiger force volunteers would help maintain social distancing among buyers at over 4,000 Utility Stores across the country, besides informing the local administrations about the stock availability of those items on which the government had given subsidy of billions of rupees.

Mr Dar said that of the one million volunteers, 154,000 had registered themselves in Sindh and they were awaiting coordination of the provincial government and their commissioners and deputy commissioners to formally start work.

When contacted, Sindh Minister for Education Saeed Ghani said that there was no need for any formal approval of the provincial government if someone wanted to do some volunteer work. He, however, made it clear that the provincial government wou­ld not allow any political party to interfere in the domain of local administration and in functions of commissioners and deputy com­missioners. He asked what would be the reaction of the PTI, if the PPP asked its workers to monitor and supervise the working of the local administrations and bureaucrats in the provinces being ruled by the PTI.

Moreover, Mr Ghani said that the Sindh government already had the services of the volunteers of the Provincial Disaster Management Authority and the Youth Parliament at its disposal and it would use them when it would feel the need.

The Sindh minister alleged that the PTI ministers were giving an impression that the CRTF would be a personal force of Prime Minister Imran Khan.

The decision to set up the CRTF was an­­n­­ounced by Prime Minister Imran Khan while addressing journalists in Islamabad on March 27 “We have a large youth population in our country which is our asset; we need youngsters in the fight against coronavirus,” the prime minister had stated.

Leader of the Opposition in the National Assembly and president of the Pakistan Muslim League-Nawaz (PML-N) Shahbaz Sharif also rejected the idea and termed it a “political gimmick”.

“The political gimmickry of tiger force must be put to an end and local bodies should be restored in Punjab to extend practical help to the people being hit by ongoing lockdowns in the wake of Covid-19,” the PML-N leader stated.

Giving statistics, Mr Dar said that around a million people had registered themselves for the CRTF that included doctors, engineers, lawyers, retired army personnel and others.