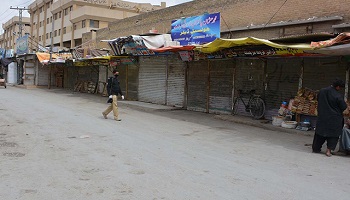 KARACHI: Traders in across the country on Tuesday said that they would resume operations from April 15. Later, the traders in Karachi withheld their call for opening businesses today for two days after assurance by the commissioner, while the business community in Punjab has urged the government to permit activities for a limited time.

Prime Minister Imran Khan, in his address to the nation today, extended the lockdown till April 30.

The premier said that some industries such as construction would be allowed to operate from Wednesday (tomorrow). The business community in Karachi said that they will resume operations from April 15 and that the traders would follow preventive measures. Addressing a press conference, a representative of the Karachi’s trader community said: "We cannot afford the imposed restrictions anymore."

"The businessmen have paid their employees a month’s salary but will we unable to do so if the lockdown extends," he said. "We will give our shops keys to [the officials at] the Chief Minister House and will protest outside the provincial chief's office," he added.

Furthermore, the traders in Khyber Pakhtunkhwa said that they could not afford the lockdown further and that they would open shops from April 15. President United Business Group, Ilyas Bilour said that small scale traders were forced into starvation due to the lockdown.

He lamented that labourers were severely affected due to the closure of business centres. A few hours after the announcement, Sindh Information Minister Nasir Hussain Shah said that the provincial government would not permit traders to resume operations. "We have drafted SOPs [for the business community] and will issue them [in the coming days]," he said.

"Small scale traders will be given a subsidy in taxes," he said, adding that action will be taken against violators of lockdown restrictions. "Even the federal government has not allowed the reopening of markets," he added.

Traders in Balochistan have also rejected the two-week extension in the lockdown announced by Prime Minister Imran Khan and decided to open their businesses in the province.

Speaking at a press conference after holding talks with the government, Abdul Rahim Kakar, president of the Anjuman Tajiran Balochistan, said that his organisation had decided to fully support the lockdown imposed by the provincial government till April 21.

Flanked by Syed Qayyum Agha, Hazrat Ali and other leaders, Mr kakar said the traders had supported the lockdown till April 7, which was extended by the provincial government till April 14.

“We have already suffered huge financial losses due to the lockdown, but we cannot tolerate further losses,” he said and added that they had informed the provincial government regarding their reservations over the extension in lockdown.

“We have decided to reopen some businesses in the province keeping in mind public needs. The government has announced to give interest-free loans to traders and the ration for 10 days to labourers,” he said.