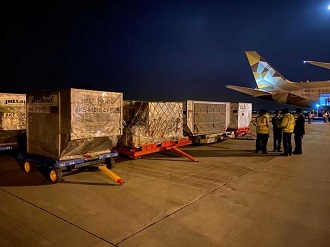 RAWALPINDI: Another batch of medical aid by the United Arab Emirates government to help Pakistan curb the transmission of Covid-19, the disease caused by the new coronavirus, arrived at the Islamabad International Airport on Sunday, according to a press release.

The second batch of medical aid containing 11 tonnes of medical supplies and preventive aid was sent by the UAE leadership in their quest to provide support and assistance to the people of Pakistan, which has been an established approach of UAE’s foreign policy since the era of Late Sheikh Zayed bin Sultan Al Nahyan and continued and developed in the era of Sheikh Khalifa bin Zayed Al Nahyan, the UAE president, stated the press release issued by the UAE embassy in Islamabad. The core of bilateral relations is “human” which is considered essential in the humanitarian policies of the emirates, it stated further.