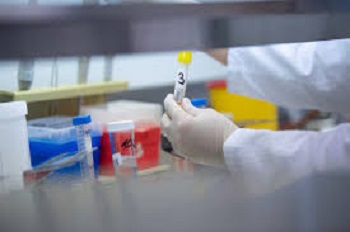 LAHORE: Researchers at the University of Health Sciences (UHS) Saturday launched a clinical trial to assess blood plasma therapy for Covid-19 treatment. On the appeal of UHS Vice Chancellor Prof Javed Akram, two persons who have recently recovered from the disease, donated blood plasma. They include renowned health professional Dr Naheed Nadeem and a journalist from Multan, Syed Asad Nadeem. The UHS VC said that the plasma donated by the two persons would be administered to two critically ill patients in Lahore and Sialkot who could not generate sufficient antibodies against the deadly virus. "We are grateful to those who have donated their plasma for the noble cause", Prof Javed Akram said appealing others to follow suit.

He said that the plasma would be administered to the critically ill patients without any charges. He further said that Punjab Governor Chaudhry Muhammad Sarwar would present appreciation certificates to all the plasma donors in a special ceremony. Prof Javed informed that several Covid-19 patients were cured after receiving transfusions using blood plasma from people who had recovered from the virus. "The treatment has been tested in several countries but there is still little medical data available about its effectiveness", he added. Convalescent plasma has proved effective in small studies to treat infectious diseases including Ebola and SARS.

Its use to treat Covid-19 patients has been authorised in other countries such as France, the United States, Switzerland and China.