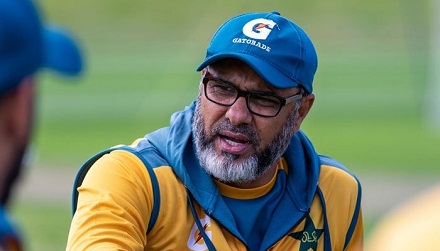 KINGSTON: Pakistan bowling coach Waqar Younis on Tuesday praised his team’s bowling attack despite the heartbreaking one-wicket defeat in the first Test against West Indies at Sabina Park in Jamaica.

The home side won the match in a thrilling finish, with three dropped catches contributing to Pakistan’s failure to wrap up the tail as Kemar Roach and last man Jayden Seales denying them the elusive final wicket.

“When two teams play, one has to lose and unfortunately that was us. When you drop catches at tense moments of the match, it’s going to hurt you and that’s what happened,” said Waqar. ““Despite defending a small target, our bowlers bowled exceedingly well and kept on taking regular wickets. Hats off to them and I feel very proud with the way our bowlers bowled,” he added.

“I think he [Babar] led the side really well. It is not easy for a young captain when you are in such kind of Test matches. I think he did a wonderful job but unfortunately couldn’t finish the game,” he concluded.

Meanwhile, Roach described West Indies’ sensational win as the biggest one for him in Test cricket.

Roach was the hero in the game, albeit with the bat, as he scored an unbeaten 30 to help his side chase down the 168-run target.

“The way how we fought to get this win was very special, and it was good to see the guys sticking together, especially the support on the balcony when I was batting, it was amazing,” Roach said. “The communication in the middle was simple. That really helped us to execute as well as we did. It was a good win, but that is now history, so it’s on to the next one.”

With the second Test starting at the same venue on Friday, there is still some concern with the form of opener Kieron Powell who managed to get just four runs in the two innings.

For Roach, the team’s overall performance merits another crack at Pakistan.

“I don’t think any changes need to be made,” he said. “Whatever changes happen, I believe it would be more tactical changes if any, but everyone can’t perform. The win was a team performance and we just have to self-reflect and get ourselves ready for the second Test.”