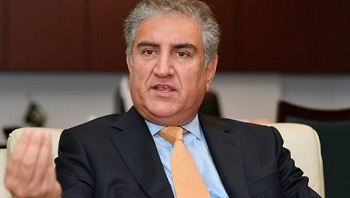 ISLAMABAD: Foreign Minister Shah Mehmood Qureshi on his return from the World Economic Forum (WEF) in Davos announced a week-long campaign in and outside Pakistan to highlight the continued negation of human rights violations and 175 days of lockdown of Kashmiris in the Indian Occupied and Kashmir (IOK).

“However, as you have seen, their focus is more towards unilateralism than bilateral talks,” he said. “India’s recent steps and the one taken on August 5 reflects their [India’s] unilateralism,” he added.  FM Qureshi said that Pakistan was successful in its efforts to highlight the issue of occupied Kashmir at the UN Security Council despite Indian efforts to ensure otherwise.

The minister agreed that the US listens to Pakistan but looks at its own interests in the region and has not delivered directly on IOK. “But what is also important is that the US has also not stopped the issue of Kashmir to be raised and debated upon as we saw twice at the United Nations Security Council. It cannot be resolved overnight,” he added.
Even earlier immediately after the meeting with Trump in Davos, the foreign minister had tweeted, “PM highlighted grave & deteriorating situation in Indian occupied J&K & the need for sustained US role to help resolve without which peace in South Asia elusive. President Trump offered to play a role to work on J&K dispute & ease tension between Pakistan & India.”

Chairman of the Special Committee on Kashmir Syed Fakhar Imam will chair a special seminar while ration will also be distributed at AJK refugee camps. “This message is not just for Pakistanis but for those across the Line of Control who continue to remain under a communication lockdown,” he said.

Earlier in a tweet, Moeed W Yusuf, Special Assistant to PM on National Security Division, had also tweeted, “President Trump promised support on issues most important to Pakistan. Instructed specific members of his delegation to ensure it. We look forward to speedy follow up.”

Cultural shows and photo exhibitions across Pakistan will be held. “Human chains as has been the norm will also be formed and I want to appeal to Kashmirs in AJK to come out in larger numbers so a message is sent across,” said the minister.